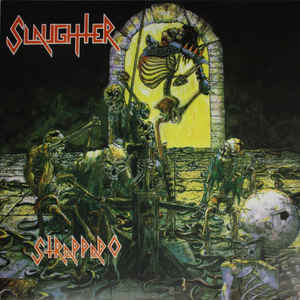 Slaughter’s Strappado hits closer to home for this particular hack than any of our previous entries. That’s because Slaughter hailed from the Toronto suburb of Scarborough, home to a ridiculously disproportionate number of metalheads in the ’80s. This includes yours truly, who earned his metallic stripes talking shop with the loads of heshers wandering around town (including members of Slaughter, Sacriﬁce, Dark Legion, etc.), and knew how much of a nightmare it must’ve been for transit employees working the nighttime eastbound routes whenever a decent-sized show made a Toronto stop.

It was here that the trio of vocalist/bassist Terry Sadler, vocalist/guitarist Dave Hewson and drummer Ron Sumners connected the dots between being ravenous metal/punk/hardcore fans, learning to play instruments from scratch and creating an album that would go on to be held in the highest regard by everyone from Barney Greenway, Justin Broadrick and Matt Harvey to Nunslaughter’s Don “Don of the Dead” Crotsley, Tom G. Warrior and the dudes from Repulsion. Curiously enough, as Hall of Fame-worthy albums go, Strappado is an odd selection. By its members’ own admission, Slaughter were hacking, slashing and struggling to ﬁgure out their instruments during the creative process, and listening to the original album’s nine tracks is an exercise that teases and toys with the borders of chaos.

A deeper analysis illustrates a Neanderthal-like simplicity to the band’s two—maybe three—riff styles, very little attention paid to tempo consistency, and bald lyrics painting pictures of hilarious and over-the-top violence, sexuality and sexual violence. Strappado is less a master stroke of innovation than it is a visceral punch in the gut. That Strappado teeters on the edge of tumultuous entropy—but still manages to emerge, poking at the pleasure centers of metal’s collective brain—is why it takes that step up from the on-the-surface amateurism to enjoyable, game-changing brilliance. And, ultimately, a spot in our Hall.