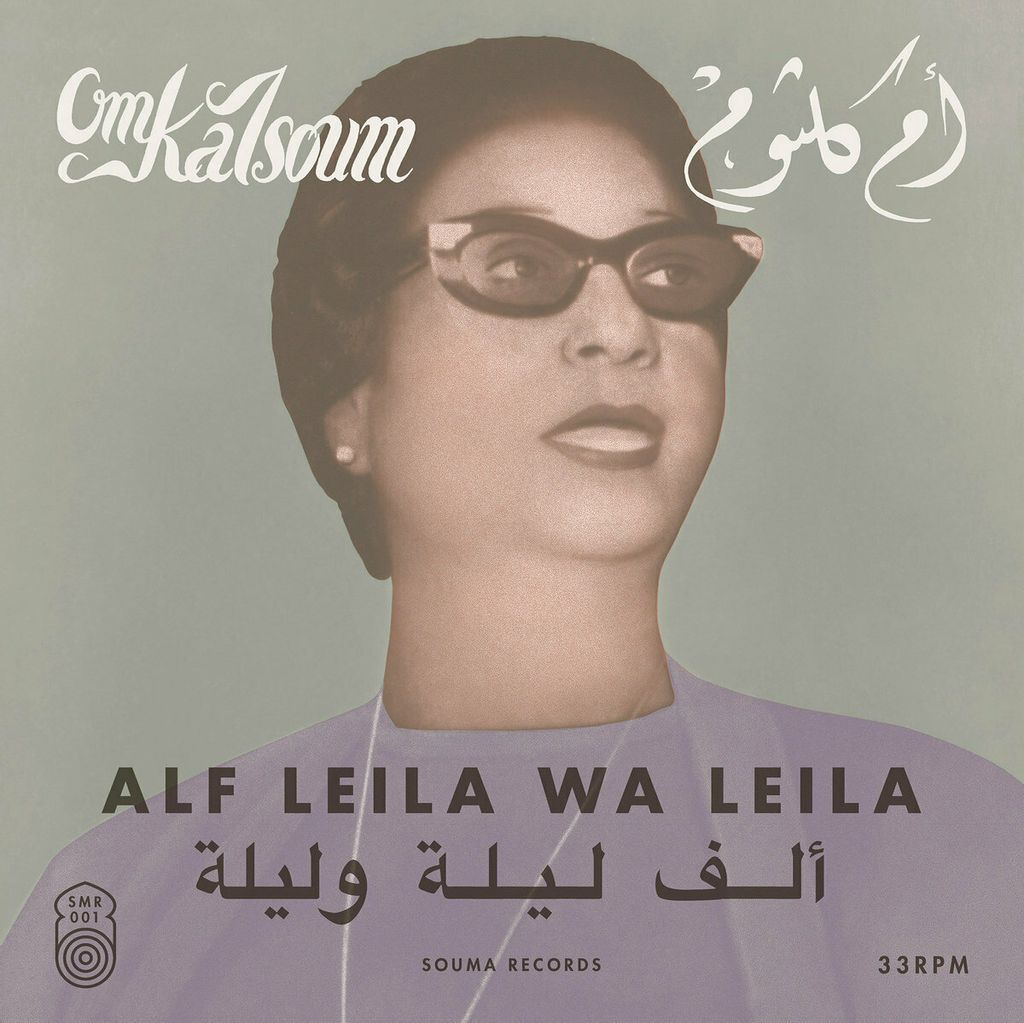 LINER NOTES :
Alf Leila Wa Leila, or “1001 Nights”, is the first Om Kalsoum song I fell in love with. How apt is the song's title? That first night was mostly about the music. I was too young to appreciate the words and at that time most of the meaning of the song passed me by. And yet I could listen to the track endlessly and enjoy the voice eternally.
As the nights went by, a thousand and one, I started to understand what Om Kalsoum was singing about with those nocturnal lyrics. The melodies of her voice and the beauty of the words were a treat for my soul. In Om Kalsoum's songs the text, the music and the performance itself form a unity, as if created by a single artist.
I still remember the night when I closed my eyes and listened to the 'star of the orient' as she sang: Leilat hob helwa… bi alf leila wa leila : A sweet night of love is equal to a thousand and one nights” and I knew that I was in love with Om Kalsoum.

As time went on, I would discover the many ways in which Om Kalsoum’s songs are special. At first, I enjoyed the mix of Arabic melodies played with western instruments - the guitar, the accordion and the electric organ. Once I knew the songs a little better, the words came more into the foreground, first in colloquial, then in classical Arabic.
I started to pay attention to what they meant and how they rhymed. Some of the words of Om Kalsoum’s songs have become words of wisdom, like proverbs among her Arabic-speaking fans. One example is, el hob keda, “love is like that”, the equivalent of the french “c’est la vie”. Another has no equivalent French or English expression, but the meaning is easy to understand, “if you want us to be as we were in the past, ask the past to come back”.

At last, I discovered the genius of Om Kalsoum’s voice: so powerful, so expressive, so full of passion. I learnt to listen not only to how she pronounced each word, but also to how she spoke each letter. When her fans demanded an encore, sure she sang the same verses back again, but never the same way twice. The connoisseurs of Om Kalsoum’s art don't only know her songs by heart, they have strong opinions about different versions of the same songs, sung on different occasions, or in different countries. For me, this is a testimony to her passion, and to her interaction with her audience. Om Kalsoum was never fond of singing in a studio.

But Om Kalsoum’s genius wasn't only a result of her incomparable talent. It was also a result of hard work and smart decisions. She surrounded herself with some of the best composers in Egypt at the time, who were more than willing to compose even one song for her, ensuring their place in Arabic music history. Egyptian composers of those days fall into 2 groups: those who composed songs for el set (literally “the lady”, but probably “diva” is a better translation) and those who didn’t accompany her.

It was first Zakaria Ahmed, El Asabgi, and the great El Sonbati in the 40s, 50s and early 60s, who composed her most famous songs. In 1965, so the story goes, a high level political ”request” was made to have Egypt’s most famous composer at the time Abdel Wahab, compose a song for Om Kalsoum in what became known as the "cloud" meeting. This was the beginning of a new phase in Om Kalsoum’s songs in which composers such as Mohamed Abdel Wahab & Baligh Hamdi, amongst others, began to blend Western influences into traditional Arabic music, bringing new colours to Arabic modern music. These modern songs brought yet another generation into the community of Om Kalsoum fans which already numbered in the millions.

Lyrics that “the Lady” sung were written by gifted minds and souls such as Ibrahim Nagi, Bayram al-Tunsi and Ahmed Rami, to mention just three. In a very beautiful Arabic idiom, the joys and pains and the thousands of shades that cross the paths of love are graciously evoked. Om Kalsoum brought both modern and classical poetry to life. Some of her texts dated back hundreds of years and likely would never have reached such a wide audience if they hadn't been heard through “Souma’s” voice.
Om Kalsoum had memorized the Qur’an - considered the reference on Arabic language - at a very young age. Later, this helped her to appreciate classical Arabic songs and to bring her own distinct colour to them.
The combination of these poets, composers and Om Kalsoum helped establish what would later be dubbed the aghany el-zaman el-gamil, the songs of the golden age - songs that still happen to be shared in the Middle East and throughout the Arab speaking world.

Om Kalsoum continuously explored new vistas in poetry and music. In her own words,
“If a person feels she’s at the top and that she has achieved everything she wants, then that means death. It means the end.” Perhaps, that’s why Om Kalsoum’s voice and her music live on today.

It's hard to imagine the breadth of Om Kalsoum’s reach. The entire Arabic speaking world was fascinated by her, from North Africa to the Arab Gulf, where she performed various memorable concerts with unforgettable moments and long standing ovations, not to mention audience members trying to get on stage to kiss her feet!
The first Thursday night of every month the streets of Arab countries were empty, except for the popular cafes where people gathered to listen to her monthly concert. It is often said that Om Kalsoum succeeded in unifying all Arabs in a way that no political leader managed to do, with her rich and varied repertoire of love, patriotic, and religious songs.

The greatest Egyptian composer of all time, Sayed Darwish, listened to Om Kalsoum as a young girl at the beginning of her career, singing one of his songs. He remarked, “this girl will become someone one day…her voice is beautiful and performance excellent, but that’s not what makes me admire her: she doesn’t sing the music, she lives it. There's something in the way she sings, I don’t know what it is, or how to express it… Hearing her sing my songs, I relive the same moments that inspired me to compose them.”

A sweet night of love is the equivalent of a thousand and one nights … and so is a night with Om Kalsoum.