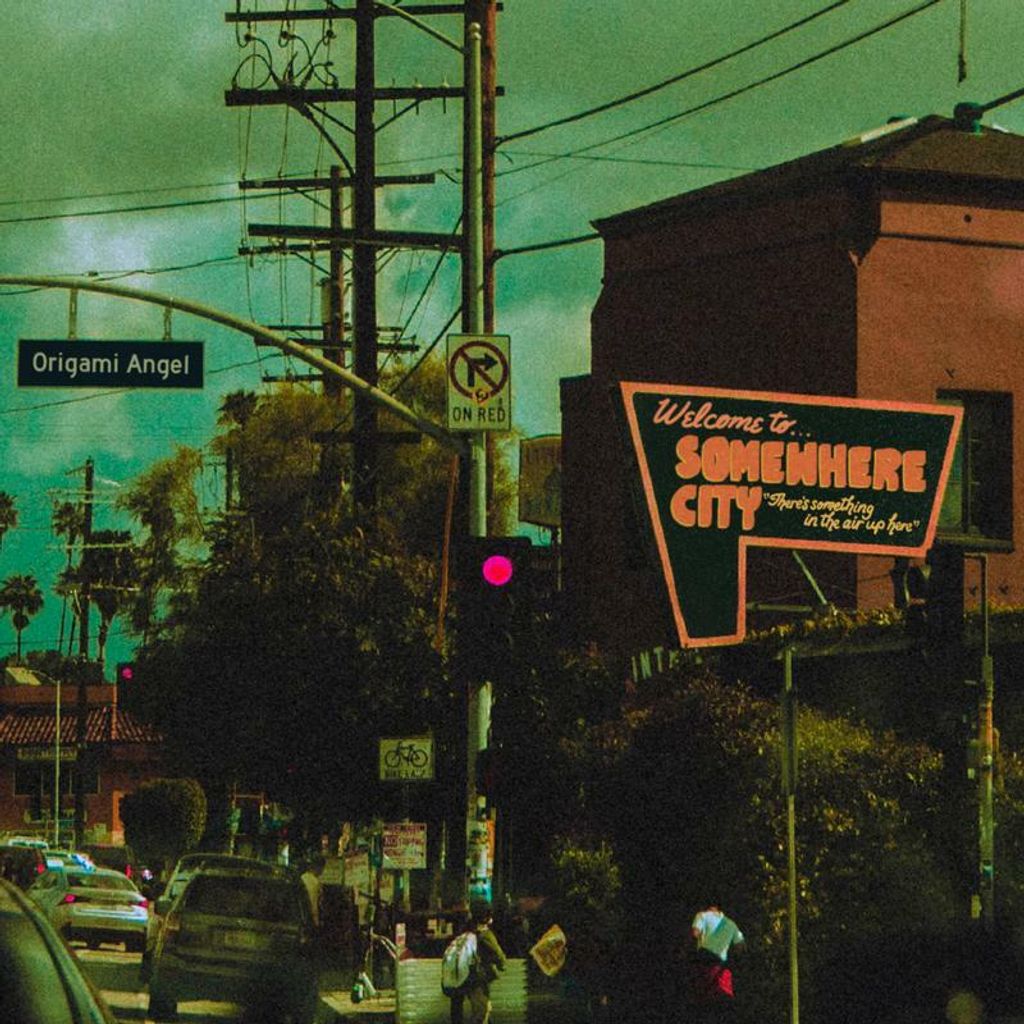 When you arrive in Somewhere City, you’re bound to notice a few things. There’s a drive-thru window open all hours of the night, and Dr. Pepper runneth over in all its water cups. A nearby amusement park is busiest on Sunday—that’s when visitors get most thrilled. There’s Danny Phantom playing from an infinite Nicktoons feed. It’s a place governed by caffeine, eternal youth, and the promise of escape. You’re not gonna be the same once you leave. Origami Angel (vocalist/guitarist Ryland Heagy and drummer Pat Doherty) has already mapped out their Washington D.C. home base and hell, even the Hoenn region of the Pokémon universe—so let them be your guide through this green-tint utopia. They’ve even written their debut LP about it, out November 15th via Chatterbot Records. You’ll want to pause your Sword and Shield playthrough for this: an acrobatic, energetic panorama that promises more than simple travel tips.

Somewhere City (the album) is as fantastical and vibrant as its backdrop. Those landmarks from earlier? They’re here in high-definition. “24 Hour Drive-Thru” is stuffed with pomp and circumstance, a blistering pop-punk cut that pumps the brakes long enough for a doo-wop vocal section. “666 Flags” is as dynamic and surprising as a banked turn, switching between Heagy’s somersaulting guitar/vocal attack and softer introspection. Other points of interest appear like hidden haunts. “Skeleton Key” is a tender love song so intricately laced between energy bursts that it’s no wonder Chatterbot devised an alternate reality game to reveal it. “Doctor Whomst” surges forth with biting intensity—built by a tapping riff as frenetic as the lyric sheet. The fizzy “Find Your Throne” has its own dynamic twists, the biggest fueled by Heagy’s relentless PMA. Somewhere City has no gods or masters. (Somewhere City claims Philly producer Jake Checkoway, though. Thanks, Jake.) The real power, as with much of Gami’s self-help dialogue, lies within. All who enter become better. Even you.