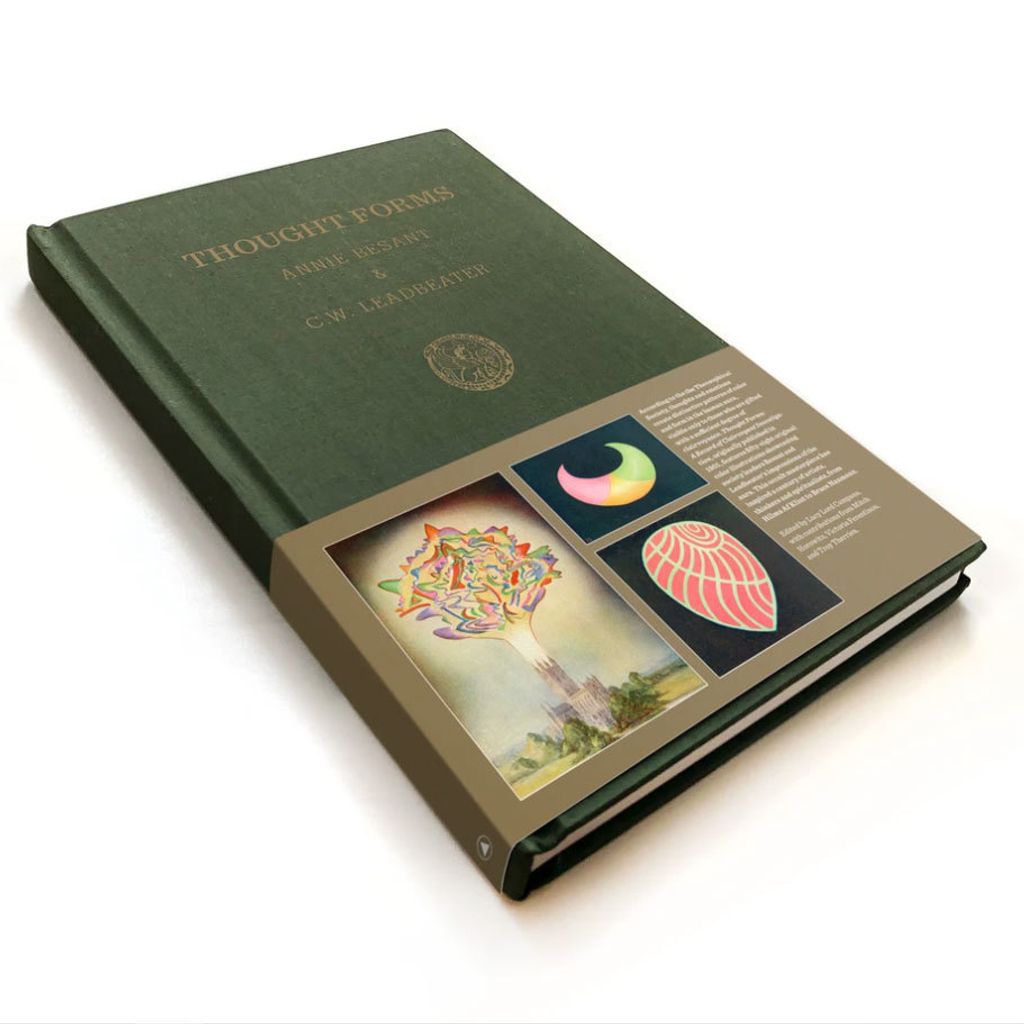 More picture and info of the book from the Sacred Bones website >> https://bit.ly/2Ls4ot6

Thought Forms: A Record of Clairvoyant Investigation is a seminal occult book compiled by the leaders of the Theosophical Society, Annie Besant and C. W. Leadbeater. It was originally published in 1905 in London. According to the teachings of Theosophy, thoughts and emotions create distinctive patterns of color and form in the human aura—visible only to those who are gifted with a sufficient degree of clairvoyance and can see beyond our normal perceptions. Besant and Leadbeater dictated their clairvoyant "thought-forms" to a group of friends who then created the 58 magnificent illustrations contained in the book. This book was a major influence on the artists Hilma Af Klint and Wassily Kandinsky among many others but has long been overlooked as a foundational pillar in art history.

Besant was also an early suffragist and political activist and was far ahead of her time as an artist and thinker. Theosophy was the first occult group to open its doors to women and Thought Forms offers a reminder that the history of modernist abstraction and women’s contribution to it is still being written.

Our re-print aims to bring this over looked masterpiece back into circulation in the form of a high quality clothbound and embossed hardcover at an affordable price. We have also worked with the editor of the project Lucy Lord Campana to commission three introductory pieces by contemporary scholars to further contextualize the book.

"This outstanding edition of Besant & Leadbeater’s Thought-Forms is thoughtfully conceived and beautifully presented. Well over a century since it first came out, readers will finally be able to truly appreciate the colours and forms presented in Thought-Forms, as much as the ideas, as they were originally intended.

We can hardly underestimate the role that Thought-Forms played in the development of Modern Western art, especially early abstract art. The illustrations and colour schemes it contains reverberate in the canvasses created by such luminaries as Wassily Kandinsky, Hilma af Klint and many others, and their legacy is still felt in contemporary art today.

More than just a tribute to the original, this superb volume offers sound contextualisation and historical embedding of Thought-Forms. It is the ideal source for students, artists, art lovers and general readers alike."

Editor
Lucy Lord Campana is an artist whose observational based painting practice explores the limits of our collective vision. Recent projects include images from the Hubble Space Telescope, a series around X-ray use in diamond mining, and methane detection with infrared technology. She teaches drawing and painting at Columbia University.

Book Introductions
Mitch Horowitz is a PEN Award-winning historian whose books include Occult America, One Simple Idea, and The Miracle Club. His book Awakened Mind is one of the first works of New Thought translated and published in Arabic. The Chinese government has censored his work. Twitter @MitchHorowitz | Instagram @MitchHorowitz23

Dr. Victoria Ferentinou is Assistant Professor at the University of Ioannina where she teaches art theory and history of art. She is the author of a number of articles and book chapters on international Surrealism and women artists, and on the relationship between modern art and esotericism. She is also a co-editor of Surrealism, Occultism and Politics: In Search of the Marvellous (Routledge 2017)

Troy Conrad Therrien is the curator of architecture and digital initiatives at the Guggenheim Museum and adjunct faculty at Columbia University and the Architectural Association where he teaches design studios and theory seminars to recontextualize architecture through magical, animist, and other esoteric perspectives.