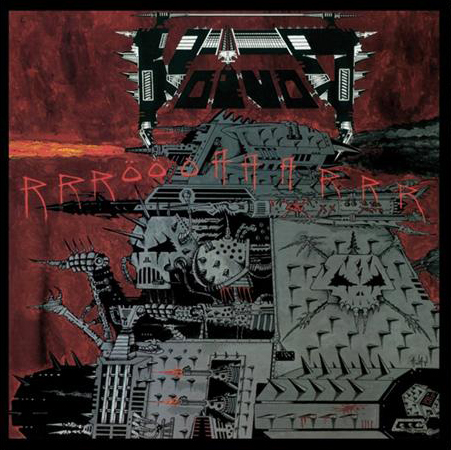 "Rrröööaaarrr", pronounced "Roarrrrrrr", is the second full length album by them. After 1984's "War And Pain", they took the same thrash metal roots, but it was just so different. In my time, I have listened to an obscene amount of thrash metal. Sadly, there are some bands who'd rather be like someone else than be something new, and Voivod certainly broke this mold. From the opening of "Korgull The Exterminator", to the chaotic speed laden drive of "Ripping Headaches", this album is focused on speed in a way most bands were not at that time. This, again, is heavily due in part to Piggy, whose guitar playing was eccentrically magical. Take for example, "Horror". The drum rhythm is fast, as is the norm in thrash metal, but the guitars are just a little behind them in the beat. It's almost like free jazz thrash, like if Charles Mingus and Dave Mustaine made music together. This decision to be just a little bit off works so well, as perfection and metal have never gone that great together.